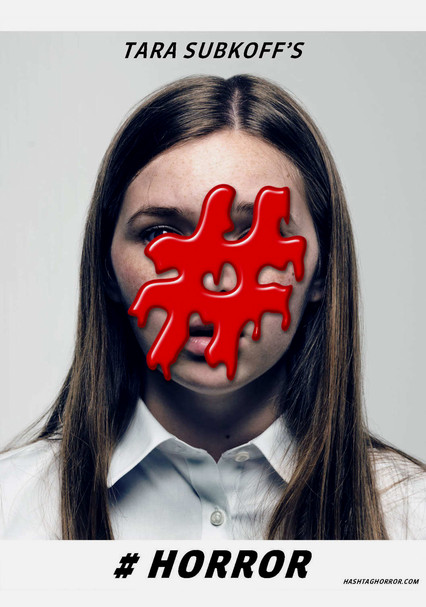 2015 NR 1h 38m Blu-ray / DVD
Inspired by true events, this creepy cyberthriller follows a group of preteens as they become increasingly involved in an intriguing online game that leads them to a threshold of real-life horror.

Parents need to know that #Horror is a social commentary/slasher movie that deals with cyberbullying, social media, and poor parenting. Its message isn't plainly obvious, but there may be enough here to get teens thinking and talking about the relevant issues. But even though the main characters are 12, the material is too mature for tweens and younger teens. Violence includes a slasher/killer who dispatches victims with splatters of gore, as well as bullying, arguing, shouting, crying, and threatening. Guns and knives are shown, and one girl cuts herself. Language includes many uses of "f--k," "s--t," "bitch," and other words and insults. An intense (extramarital) sex scene starts the movie, and there's some sex talk afterward. The young girls drink vodka, and there's adult smoking and a reference to attending "meetings" to deal with drinking.

A man has extramarital sex in his car; no nudity shown, but it feels pretty intense. Girls talk about how one of their parents slept with another of their parents. Some innuendo/sex talk.

A killer slashes victims with a blade. Dead bodies, sprays of blood. Bullying, threats, arguing, crying. An enraged adult picks on youn girls, pushing them around and shouting at them. Characters are urged to "kill themselves." Imagined vision of blood gushing into a swimming pool. A girl cuts herself; another vomits after eating. A gun is shown but not fired. A man pulls a knife on several young girls. Rape is mentioned.

Makes a clear statement against bullying and cyberbullying, showing victims' reactions and indicating how much words can hurt. It makes social media look fun and cool as well as nasty.

Girls shown being "addicted" to smartphones, but no visible logos.

Twelve-year-old girls drink alcohol (vodka). Adults smoke cigarettes. A woman is said to be attending meetings for her drinking.