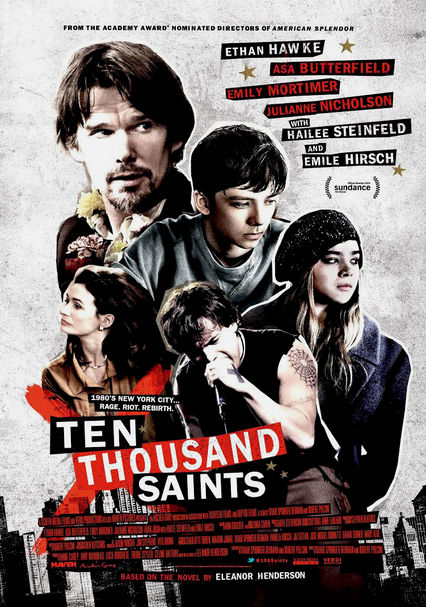 2015 R 1h 47m DVD
After a friend overdoses, 17-year-old Jude is uprooted from his Vermont home and sent to live with his father in New York City. Amid a social scene awash in drugs and alcohol, Jude unexpectedly finds kinship with a group of straight-edge abstainers.

Parents need to know that Ten Thousand Saints is an edgy drama about two teens in a tough situation, set in 1980s New York. They smoke pot and take plenty of other drugs (including cocaine and inhalants); their parents are absent, preoccupied, or just oblivious; and the kids spend much of their time hanging out on the streets or with homeless punk rockers squatting in abandoned buildings. There's lots of swearing (including "s--t" and "f--k"), some sexual references (including an unplanned pregnancy), and a lot of questionable decisions. It's best for older teens, especially if parents are there to discuss it with them.

Two teens kiss and get undressed. It's clear that more happens off screen, because the girl gets pregnant and much of the film focuses on how she tries to resolve it.

A group of teens gets in a fight that leaves one bruised and lying on the ground.

When a teen dies in a tragic accident, his family and friends try to keep his memory alive, but they eventually realize they can't live their lives in the quest to keep their late loved one with them -- they have to make their own decisions about what's best for the living.

The teenage main characters do lots of drugs, including pot, cocaine, and inhalants. One has a father who grows pot and often smokes with his son, doing little to discourage the boy's activities. But part of the film focuses on a group of "straight edge" kids who refrain from drugs, drinking, and sex and try to encourage others to live a healthier, more wholesome lifestyle.