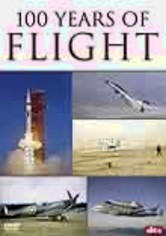 2004 NR 2h 0m DVD
Orville and Wilbur would love this documentary, which covers a century of aviation. The film examines the early years of flight, including the Wright Brothers' amazing feats, various aviation pioneers and the quest to cross the Atlantic. The face of war was changed through aviation, and the film explores the history of air warfare, from World War II bombers to modern-day fighter jets. The history of commercial air travel is also chronicled.