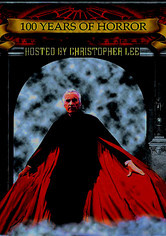 1996 NR 2h 0m DVD
From Frankenstein to Freddie Kruger, Hollywood's horror genre is honored in this documentary hosted by veteran spook star Christopher Lee. The film encapsulates the history of the genre, from the silent era and the first use of special effects to the gratuitously graphic slasher era of the 1970s and 1980s. Includes clips of old-school actors Boris Karloff and Bela Lugosi, plus interviews with directors such as Roger Corman and John Carpenter.