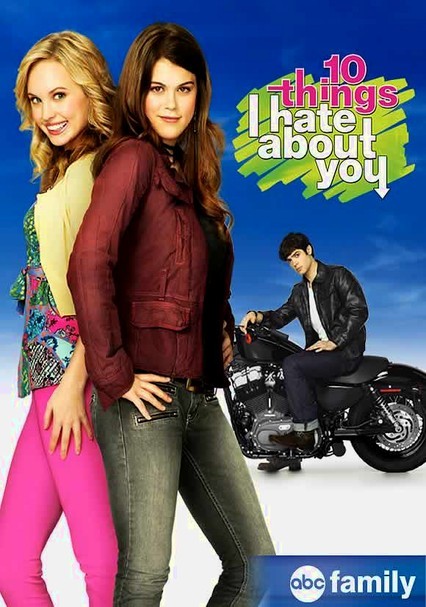 2009 TV-14 2 discs
Sparks fly when the Stratford sisters -- feisty, independent Kat (Lindsey Shaw) and preening beauty Bianca (Meaghan Jette Martin) -- start a new year at Padua High, where conniving cheerleaders and a labyrinthine social hierarchy are just the beginning of their troubles. Ethan Peck co-stars as brooding hunk Patrick Verona in the debut season of this family sitcom inspired by the movie of the same name.

Parents need to know that this teen-targeted series based on the same-named 1999 film includes frequent references to sex -- including comments about girls' bodies, use of terms like "get laid," passionate kissing, and mention of teens' sexual experience. Popularity is a key concern, and one central character uses her social status to terrorize all but her closest friends, and her behavior goes unchecked by her peers and adults. Expect some intermittent strong language ("bitch," "ass," and the like) and references to teen drinking (though nothing is shown). Kat and Bianca's father -- who never wavers in his protection of them, even when they defy him -- is the show's strongest positive role model.

Many references to sex. Teens have romantic relationships, and there's a good bit of passionate kissing and even some mild groping. Kat and Bianca's dad often warns them of boys' not-so-innocent intentions with warnings like "boys want to put a baby in you." Teens toss around terms like "getting laid" and discuss girls' appearances and cup sizes. Bianca alludes to Kat's previous sexual experience.

The series has a strong focus on high school social structure, and many characters are preoccupied with popularity and how to achieve it (though others apparently couldn't care less). Still, although characters like "mean girl" Chastity use popularity as an excuse to be cruel, others stand up for themselves, and there's a strong father-daughter relationship at the heart of the series.

Teen drinking is implied at parties, but nothing is shown, and the drink is said to be non-alcoholic beer.