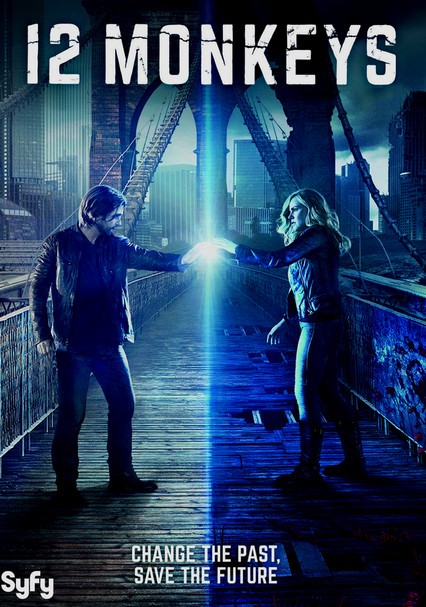 2015 TV-14 2 seasons
Decades after a global plague nearly exterminated the human race, James Cole decides to use his powers as a "chrononaut" -- or time traveler -- to erase the pandemic from history before it can wreak havoc on the Earth's inhabitants.

A reboot of the 1995 sci-fi classic, this mind-bending series describes the super-temporal mission of James Cole, whose time-traveling abilities allow him to voyage back from 2043 to 2015 to prevent a deadly plague from decimating civilization.

With an apocalyptic future still looming, the time-traveling mission to save humankind continues. In the second season, guilt-ridden bioengineer Benjamin Kalman joins the fight to stop the lethal virus that his team unleashed.

Parents need to know that 12 Monkeys is a science-fiction show loosely based on Terry Gilliam's dystopian film about time travelers attempting to prevent a plague that wipes out most of humanity. Dread and menace are constant, with enemies popping up unexpectedly and characters dying suddenly. There are point-blank shootings, stabbings, blood, gore, and disturbing medical/military imagery, including scenes of dead bodies being piled high post-plague. Heroic characters have murky/unclear motives and questionable methods.

One character advises another to "get laid," and the former jokes he'll go back in time and have sex with his friend's mother.

The show's plot hinges on a plague that destroys mankind; there are disturbing images of dead bodies being stacked in piles; starving, bleeding people; faceless evil people who come out of nowhere to menace characters; and stabbings, shootings, and bludgeonings. Lots of disturbing medical/military imagery.

This show is based on an American remake of a French sci-fi movie; viewers may want to see one or both movies, which are more violent and disturbing than this show.