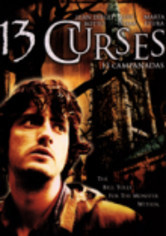 2002 NR 1h 48m DVD
Years after a violent incident tore his family apart, a young man returns home to find his father's art studio remarkably intact, frozen in time as if nothing had happened. Later, to his horror, he discovers that his mother is still alive -- a fact contrary to what he'd been told as a boy -- and living in the local insane asylum. Will he heed her lunatic warnings to run away as fast as he can, or will he stay to fight his family demons?