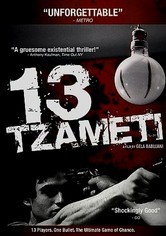 2005 NR 1h 26m DVD
An award winner at the 2006 Sundance Film Festival, Géla Babluani's taut neo-noir thriller sends its young protagonist, Sébastien (George Babluani), on a harrowing journey through a dark underworld of chaos and crime. Not one to seek adventure, Sébastien uncharacteristically throws caution to the wind when he decides to follow a set of instructions intended for someone else, leading him to a nightmarish destination from which he may never return.