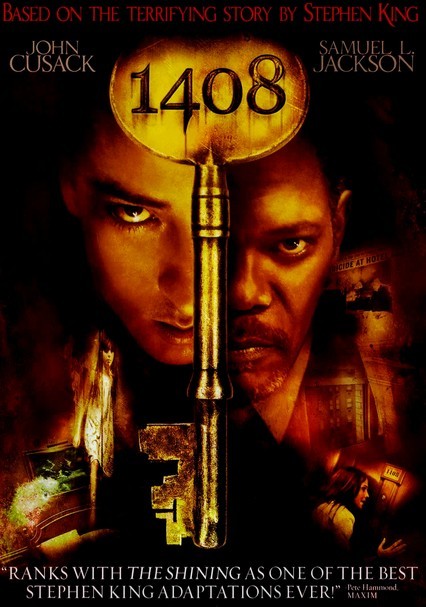 2007 PG-13 1h 44m Blu-ray / DVD
Writer and paranormal debunker Mike Enslin is determined to demystify the ghostly events in room 1408 of the Dolphin Hotel, even though a hotel clerk warns him against it. But Enslin believes the eerie goings-on may be best-seller material.

Parents need to know that this horror film is more about psychology than gore, though the main character, Mike, does sustain some bloody injuries from the various attacks on him (flying furniture, collapsing architecture, and more). He also suffers increasing emotional distress and irrationality, remembering both his young daughter, who died of a disease (scenes show the wasting girl and arguments between her parents), and his resentful, despairing, wheelchair-bound father. The nightmare-style narrative is illogical and sometimes disturbing, including ghosts, loud noises, jump scenes, and grotesque images of insects and bloody corpses. Mike drinks frequently and smokes once (very dramatically). Language includes one use of "f--k" and plenty of other words: "s--t," "ass," "bitch," etc.

Dead bodies in a tub appear very briefly undressed (not explicit); bikinis and swimwear on beach.

A surfer is hit by a wave and sinks underwater, then appears unconscious on shore; some brutal violence is indicated in newspaper and file photos (bodies are bloody, dead by suicides -- including drowning, throat slicing, gun shots, and hanging). A couple of ghosts jump out of the hotel room window (woman screams as she falls); hand smashed by window bleeds (bloody smears on walls, in sink, on shower curtain); man almost falls off building ledge; room "assaults" Mike, first overheating, then freezing, then collapsing, crashing, bleeding, and burning.

Cynical writer learns to cope with grief and guilt through supernatural experiences; much of the movie takes place in a room described as "evil."

Mike drinks frequently (cognac, hotel liquor bottles); Mike thinks he's been "dosed." Mike's mirror image smokes; a former smoker, he ritually keeps a cigarette near him so he might use it if necessary -- by film's end, he does.