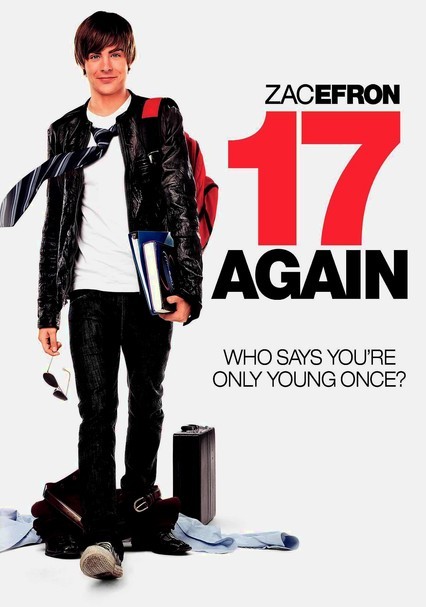 2009 PG-13 1h 42m Blu-ray / DVD
Nearing a midlife crisis, thirty-something Mike wishes for a "do-over" -- and that's exactly what he gets when he wakes up to find he's 17 again. With his adult mind stuck in a teen's body, Mike has the chance to reverse some decisions he once made.

Parents need to know that they may want to think twice before letting young tween High School Musical fans see this PG-13 rated comedy, which is edgier than most of star Zac Efron's previous work. There's a scene of teens drinking at a party and a fair number of sexual references. It's generally more talk than action, but there's some making out, a teen girl gets pregnant, and one character hoards condoms. But curse words are few and fairly mild ("ass" and "bitch") and violence is at a minimum (of the two "fight" scenes, one is cartoonish, the other lukewarm). Parents may appreciate the fact that Efron's character implores his fellow teens to make so-called "smart" decisions about sexual activity and college.

More references than actual sex/action. A teen girl makes out with her boyfriend frequently. In one scene, a teen girl tries to seduce a guy with animal role-play. Conversations sometimes include sexual innuendoes; one guy hoards condoms because he says he has "needs." Discussion of abstinence and why it works (or not) for teens. A teen boy kisses a woman old enough to be his mother. A teenage girl gets pregnant, and her high school boyfriend offers to marry her. Girls throw themselves at a guy, essentially offering sex. Adult couple show in bed together. A boy wearing nothing but a shield (nudity implied) walks out of a party.

One scene features intense slapping. In another, a grown-up swings a hatchet and light saber against a teen, but the scene is played cartoonishly. Some bullying and brief fistfights.

Characters learn lessons about appreciating family and making smart decisions. But to get there, they navigate some tricky situations (for instance, a high school senior gets his girlfriend pregnant and gives up college to marry her and find a job, leaving him frustrated and resentful).

Products featured in the movie include Captain Crunch, Pringles, Nutella, and Old Milwaukee Beer. Much is made of a character's American Express Black Card.

One scene shows teens drinking (some of them drunk) at a party.