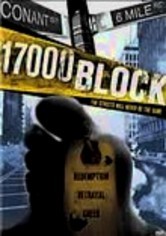 2005 NR 1h 27m DVD
Dragged into the seamy underbelly of the Detroit mob scene, a young man from the streets must learn new survival skills in an unfamiliar -- and hostile -- world. Coerced by gangsters to pull off a heist, Buck (Al Nuke) finds himself on the run after the scheme goes terribly wrong. When his Uncle Eddy (Darius Thomas), a local crime lord and former ally, abandons him, Buck is left alone to navigate a harsh terrain devoid of loyalty or honor.