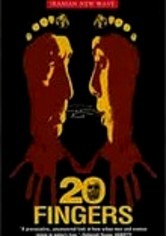 2004 NR 1h 12m DVD
Presented in a series of vignettes, this intensely intimate drama chronicles the lives of seven Iranian couples (played in each episode by Mania Akbari, who also wrote and directed, and Bijan Daneshmand) whose wrenching conversations reflect the many challenges facing men and women in contemporary Iran. Akbari's unflinching film scored the Grand Prize at the Bahamas International Film Festival and an award at the Venice Film Festival.