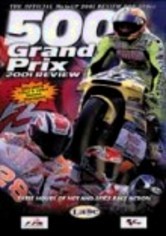 2002 NR 3h 10m DVD
Three hours of motorbike mania populates this adrenaline-pumping collection from the 125cc and 250cc seasons of 2001, culminating in an epic matchup between Italians Valentino Rossi and Max Biaggi for the MotoGP 2001 championship. Other racers include Loris Capirossi, Garry McCoy, Carlos Checa and Chris Walker. Lengthy portions of races are preserved and accompanied by sterling commentary from Keith Huewen and Jules Ryder.