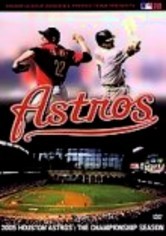 2005 NR 2h 0m DVD
After years of close calls, the Houston Astros finally reached the World Series for the first time in franchise history in 2005, where they ultimately couldn't catch the Chicago White Sox. Capturing the Astros' most memorable season on record, this retrospective program recaps all the highs and lows of their championship year, including Chris Burke's 18th-inning walk-off home run in the fourth game of the National League Division Series.