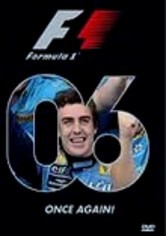 2006 NR 3h 0m DVD
Relive the highlights and raw excitement of the 2006 FIA Formula One World Championship, a fierce contest that saw seven-time world champion Michael Schumacher battling it out for the top position against Team Renault's Fernando Alonso. Special features include a tribute to Schumacher, who announced his retirement in 2006; interviews with Bernard Ferguson of Cosworth and Ron Dennis of McLaren; and a spotlight on the Super Aguri team.