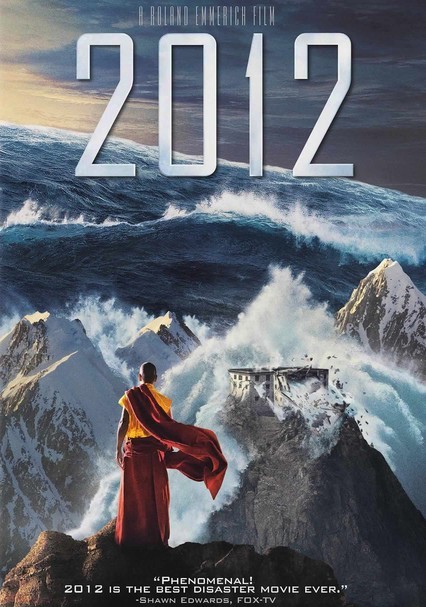 2009 PG-13 2h 38m Blu-ray / DVD
When volcanoes, earthquakes and other natural disasters suddenly threaten to destroy the world, a divorced father desperately attempts to save his family -- unaware that a conspiracy is afoot amid the chaos in this doomsday thriller.

Parents need to know that director Roland Emmerich's 2012 is an intense, violent disaster movie, with billions of anonymous characters getting killed during massive scenes of destruction (earthquakes, tsunamis, and more). Although the tone is mainly exciting, the relentless devastation could terrify or depress many viewers (both kids and grown-ups), especially those who've been through natural disasters themselves. In other words, this is no movie for kids anxious about the state of the world. Fans of the genre will find some of the effects truly impressive, but there's not much in the way of character or plot depth. Expect a little bit of kissing, drinking, and swearing (including "s--t"). All that and it's almost three hours long. ...

One character is a plastic surgeon who does breast implants. He meets one of his patients, and they mention her surgery several times. Gordon and Kate briefly discuss "making a baby" of their own. Kate and Jackson kiss once, and there's a near-kiss between Adrien and the president's daughter.

Not much blood and gore (one character gets his leg gouged in a giant gear), but the massive destruction results in countless anonymous deaths. The movie does focus dramatically on certain known faces as they meet their terrible fates, but it rarely stops to linger on them. Two children watch as their father falls to his death and another character is ground up in some machinery. Smaller moments of hostility at a boxing match, and a character punches another character in the face. A mass suicide is mentioned on a news report.

Despite the relentlessly depressing, gruesome subject matter and millions (billions?) of deaths, the film's main point is that family is ultimately the most important thing in life. Several characters risk their lives or well-being for family members, and one character tries (tragically) to contact his family too late. Certain selfish characters are redeemed by saving family members, and the movie makes a point of mentioning that the most selfish character of all has no family. Aside from that, a few characters look beyond family to try to rescue total strangers as well.

A wealthy character brags about his fancy new Bentley. Pull-Ups diapers are discussed and shown.

Two minor adult characters are shown drinking. One takes his first drink in 25 years when he discovers that the world is going to end.