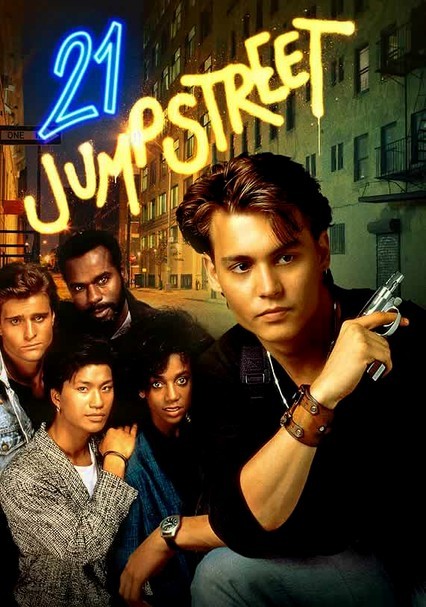 1987 TV-14 3 seasons
Johnny Depp stars in his breakout role as police officer Tom Hanson, the sardonic leader of a pack of cub investigators who pass as pupils while squelching underage mischief in this late 1980s crime drama. Whether joining a gang, posing as punk rockers or infiltrating a prom, the job requirements are many and great for Hanson and his team as they combat youthful but no less hostile culprits. Peter DeLuise and Holly Robinson Peete co-star.

Although they come from different backgrounds, the police officers headquartered at 21 Jump Street have one unifying characteristic: They can all pass for high school and college-age students, allowing them to work undercover. The third season of this late-1980s series -- the Fox network's first bona fide drama -- helped cement the budding careers of a young Richard Grieco, Holly Robinson Peete and future Oscar nominee Johnny Depp.

The baby-faced cops at 21 Jump Street back are on the case, infiltrating high schools and hanging out at the hot spots as they continue to investigate crimes involving minors. As the fourth season opens, Dennis Booker (Richard Grieco) quits the police force after ensuring the release of Officer Tom Hanson (Johnny Depp) from prison. The impressive slate of guest stars includes Thomas Haden Church, Rosie Perez, Vince Vaughn and Shannen Doherty.

Parents need to know that 21 Jump Street is basically Law & Order for teens, and much more serious than the 2012 theatrical release of the same name. Battle lines are drawn clearly: The show's police officers are on the side of good, the criminals on the side of bad. There is very little moral ambiguity; it is easily evident who viewers are supposed to root for. This is a police procedural show, so there is a "crime of the week" on each episode; parents may be concerned about some of the crimes spotlighted, such as one episode where a young baseball player is menaced by villains out to murder him, as well as one where one of the show's officers is named in a paternity suit leveled by a high-schooler. Many kids will find the dated fashions, music, and expressions hilarious; parents may find themselves explaining outdated slang.

Some references are made to dating, love, and romance, as well as to characters (male and female) being attractive. There is no nudity or onscreen sex, but there may be mature discussions, such as one episode that features a teen who accuses an adult of impregnating her, and another where a young girl becomes a prostitute.

Violence, drugs, prostitution, even murder are confronted head-on from the stance of "crime doesn't pay"; criminals may brandish guns but there is no bloodshed. Violence is always followed by consequences, and the characters in danger are almost always teenagers and adults.

Characters occasionally insult each other ("dork," "spazz"), and the general tone between the officers is one of mockery. Villains on the show occasionally use words like "freaking" or "crap."

There's a clear message that crime is bad and the most appealing folks on the show are the good guys. Social issues are front and center in the show, from gang issues to AIDS awareness. Crime may occasionally appear glamorous to teens, i.e. criminals are sometimes good-looking and appealing.

Many episodes revolve around drugs and drinking, from the perspective of these things being negative. Criminals are often shown drinking and smoking or at bars.