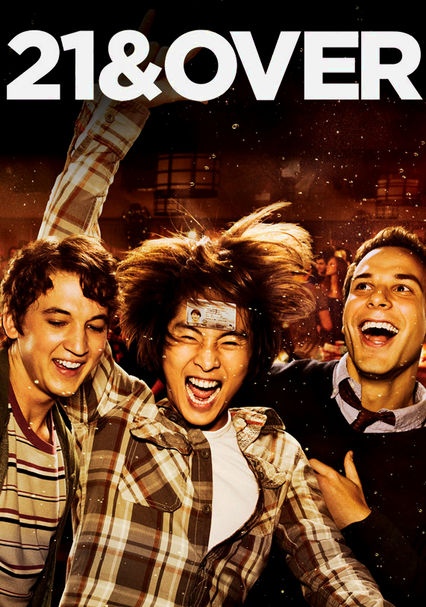 2013 R 1h 33m Blu-ray / DVD
Jeff's straight-and-narrow life changes abruptly when his buddies take him out for a 21st birthday bash designed to make up for lost time -- the night before a crucial med school interview.

Parents need to know that 21 and Over was written and directed by the same team that wrote The Hangover and features the same type of raunchy humor, if perhaps at not quite the same level of excess (though it's plenty over the top!). The comedy follows three friends through a single night of debauchery as they celebrate a 21st birthday, a momentous event that they believe should be celebrated by getting as wasted as possible. They drink at parties, they drink at bars, they even drink in a taxi. Then they drink some more, until one of them is completely passed out. There's a string of misadventures, a few fights, and some sexual harassment -- plus near-nonstop profanity ("f--k," "s--t" and much more), people smoking pot at a party, and a few brief glimpses of topless women and almost-nude men seen from behind. Men make out in one scene.

Many, many crude sexual references, though little actual physical contact. A guy and a girl flirt with each other all through the film and eventually kiss. A guy drinks shots that are tucked between breasts and placed on navels. A few brief flashes of topless women, and several longer scenes feature almost-nude men seen from behind. Two men walk around wearing nothing but socks on their penises; they also make out. A stuffed animal is shown glued to a man's genitals.

Several people get into a barroom brawl, throwing both punches and stools. They later go at it again, with one man using a baseball bat to destroy several household objects. A woman uses self-defense techniques, including a knee to the groin, to subdue a man. Two almost-nude men are subjected to ritual violence, including being spanked with a paddle. They later wrestle each other, still almost completely naked. A buffalo charges through a crowd, butting several people.

In the process of reuniting to celebrate a 21st birthday, three formerly close friends rekindle their friendship. Though their antics are juvenile -- and many of their actions, especially when it comes to excessive drinking, flat-out irresponsible -- their feelings are heartfelt. Jokes rely on sexism and stereotypes for laughs.

The characters spend an entire debauched night getting more and more wasted, with many sequences of people drinking beer, shots, more beer, playing drinking games, slurping liquor off of women's bodies, sucking straight from a keg tap, and drinking some more. A few scenes feature people smoking pot, and one character mentions that he spent an entire night dancing after taking LSD.