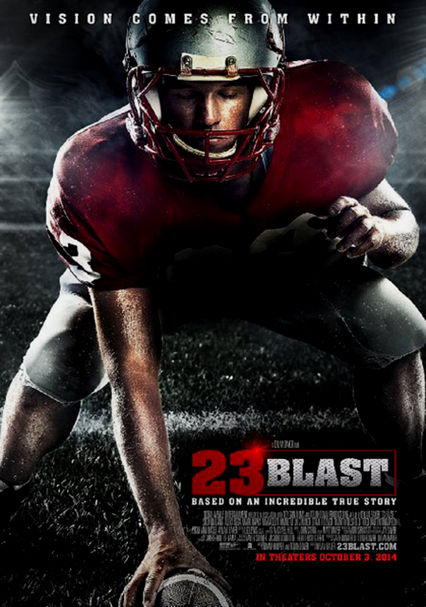 2014 PG-13 1h 38m DVD
In this inspiring saga based on a true story, true grit illustrates what courage and willpower can achieve as high school footballer Travis Freeman defies all odds by finding a way to continue playing for his team after being struck blind.

Parents need to know that 23 Blast is based on the inspiring true story of Travis Freeman, a Kentucky high school football player who went blind -- but, owing to the support of his coach and teammates, was able to play despite his disability. Religion is portrayed as one of Travis's sustaining strengths, in addition to a loving family and loyal friends. Expect the kind of on-field violence normally seen in a football game: Players willfully try to run each other down in practice, and some are sacked by opposing teams hard enough to get hurt. A player has a bloodied hand in one game. But other than that -- and the fact that one of Travis' friends is portrayed as having a drinking problem -- there's not much iffy stuff here, and plenty of positive messages about the payoffs of hard work, teamwork and individual strength.

Large high school football players bash into each other in practice and games. Several players are injured in the course of practices and games.

After losing his sight, gifted high school football player Travis finds a way to live a meaningful life and even play football again. Consistently uplifting messages about triumph through hard work and teamwork over adversity.