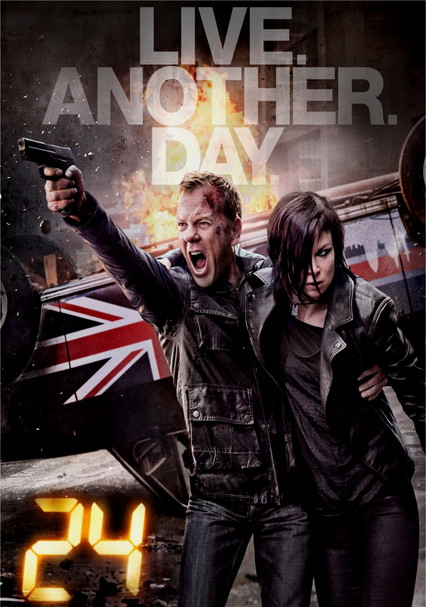 2014 TV-14 1 season
The countdown starts again and Jack Bauer returns to action in this show from the creative team behind the award-winning "24." Fans will also welcome the return of the series' groundbreaking format, which chronicles Bauer's exploits in real time.

Agent Jack Bauer is back for more in this pulse-pounding reboot from the creative team behind the groundbreaking classic series. Each of the limited series' episodes unfolds in real time, the format that helped make the original a hit.

Parents need to know that 24: Live Another Day is an intense action-thriller that uses plot twists and realistic violence -- from shootings and explosions to bloody stabbings and beatings -- to drive the story forward. Some subplots involve illegal drugs, and minor characters drink and smoke, but sexual content is largely limited to innuendo. The main character uses the word "dammit" a lot, and you'll also hear iffy words like "bitch," "ass," and "pissed."

Light kissing and innuendo with implied sex but nothing shown onscreen. Some "sexy" characters (mostly women) are scantily clad, but it's not the norm.

Violence is realistic and intense, from explosions and gun battles to gory stabbings and bloody injuries.

The series portrays the world as a dangerous, duplicitous place where survival sometimes comes at a moral cost. Morality is hardly black and white either; the government isn't always "good," the "bad guy" isn't always "bad," and sometimes a good person must do bad things in pursuit of justice.

Some drinking and smoking, with a few subplots involving illegal drugs. In the past, Jack was a heroin user but regrets his actions.