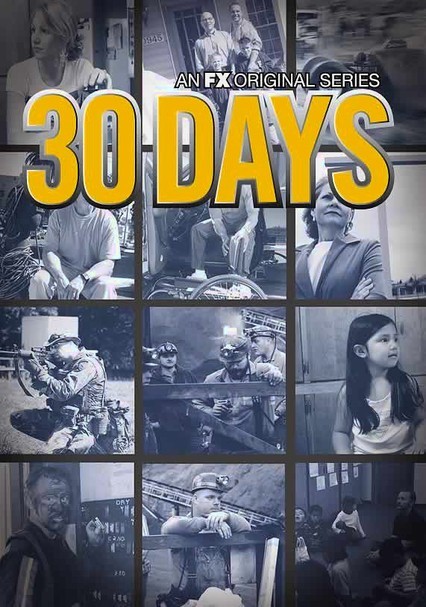 2005 TV-MA 3 seasons
Supersize Me director and star Morgan Spurlock created and hosts this "do-gooding" reality series that attempts to up participants' empathy quotients -- and provoke discussion among viewers -- by immersing them in someone else's reality for a month. Not one to shy away from experience, Spurlock himself joins in the action, going to work in the coal mines of his native West Virginia and attempting to survive on minimum wage for 30 days.

Morgan Spurlock (of Supersize Me fame) hosts this one-hour documentary film series that places subjects for a month in situations they're unlikely to seek out on their own. By subjecting themselves to such circumstances, participants help shed light on social issues plaguing America today, such as the rift created by religious differences between Muslims and Christians in America, the incarcerated and the lawyers who put them in prison, and more.

What better way to give people a crash course in empathy than to have them inhabit somebody else's life for 30 days? That's exactly what Super Size Me director and star Morgan Spurlock does on this popular FX Network show. Season 2 opens with "a border-patrolling minuteman" moving in with an undocumented Mexican family and continues with episodes on abortion, New Age healing, prisons (with Spurlock himself spending time behind bars) and more.

Host Morgan Spurlock presides over a third season of the absorbing FX series, which places participants in fish-out-of-water scenarios for a month and chronicles the funny, surprising and often moving results. Highlights include a Massachusetts gun-control advocate who moves in with an Ohio gun-enthusiast family, an ex-NFL star who spends 30 days in a wheelchair, and a traditional mother who moves in with a same-sex couple and their adopted sons.

Parents need to know that this thought-provoking reality series was created by Morgan Spurlock, the director of Super Size Me, and follows in the documentary's footsteps by dissecting issues that face Americans every day. The show tackles some very controversial topics, including illegal immigration, job outsourcing, abortion, poverty, religion, and sexuality. As a result, most episodes feature plenty of confrontational exchanges as participants are forced to re-examine their personal beliefs and behaviors; some of the spirited "discussion" may make sensitive kids uncomfortable. But teens could learn a lot by watching -- particularly the importance of taking a close, objective look at your own values and world view.

Varies according to episode topic, but, in general, not much to worry about beyond the occasional skimpy outfit and relationship discussion.

Plenty of hostility and angry confrontation, but no physical violence to speak of.

The series' primary goal is to open minds to new ideas and behaviors. Some participants react badly to being outside their comfort zone, and many stubbornly cling to their preconceptions and/or react confrontationally to others, but the overarching structure is all about changing society for the better.

At least one episode is designed to raise awareness about over-consumption and materialism.

Varies widely depending on the episode; one is entirely focused on binge drinking.