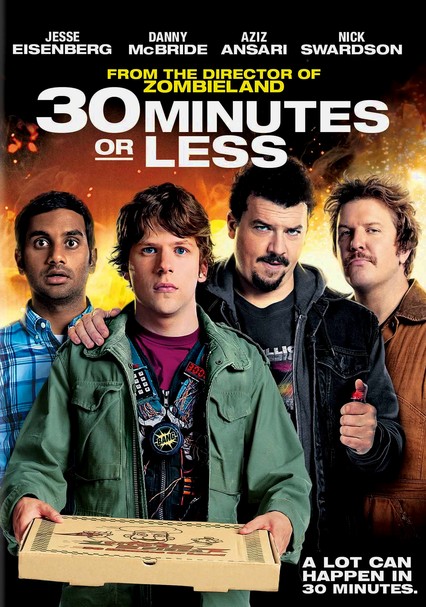 2011 R 1h 23m Blu-ray / DVD
Two small-town criminals planning a bank heist wind up abducting pizza delivery driver Nick and forcing him to commit the robbery -- giving him a strict time limit to boot. With the cops and the crooks breathing down his neck, can he beat the clock?

Parents need to know that this subversive, mature comedy earns its R rating with lots of adult material -- from partial nudity to drug use, violence, and swearing. The villains catch the main character, strap a bomb to his chest, and force him to rob a bank. Guns are also pulled, a flame thrower is used as a weapon, and there are car crashes, fights, and at least one dead body. A strip club scene includes topless women; there are also some implied sex acts (including oral sex) and lots of innuendo. Language is constant, including "f--k," "s--t," "p---y," "t-ts," and "c--k." Characters also drink lots of beer and smoke some pot.

The bad guys visit a strip club, where several topless women are seen. One of the main characters receives oral sex (off screen) in a car. One character receives a lap dance on screen. He plans to open a massage parlor that obviously caters to sexual desires (there's a fake commercial for it after the closing credits). Also lots of strong sexual innuendo and humor.

The main character spends most of the movie with a live bomb strapped to his chest. Guns are pulled fairly often, and a flame thrower is used (with one flaming victim). One character has a pen gun. There's blood, and at least one character dies. One character hires a killer to bump off his father. There are car chases and crashes and physical fights. Characters watch scenes from a Friday the 13th movie on a big-screen TV.

Though there are moments of bravery and empathy, the movie's final message is fairly negative. The bad guys' evil scheme is excessively violent, showing anger, lust, and greed. And the way the heroes respond isn't very noble, either.

Facebook and "O'Douls" (non-alcoholic beer) are each mentioned once. The "5 Hour Energy" drink is used as part of a joke.

No one is shown to have a drug problem, and no one is a dealer, but the main characters are seen smoking pot and drinking beer. The bad guys drink beer even more often, though the beer drinking more or less stops after the bomb goes online.