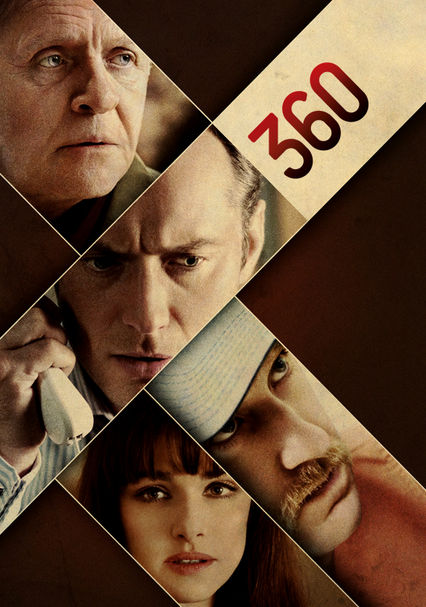 2011 R 1h 53m Blu-ray / DVD
In this remake of the 1950 classic La Ronde, an all-star cast weaves through interrelated stories about love, passion and loneliness. From London and Denver to Phoenix and Vienna, people are haunted by their need to connect, despite the consequences.

Parents need to know that 360, which is loosely based on the 1900 play La Ronde, follows different pairs of characters, usually before, during, or after a sexual encounter. With sexuality the unifying theme in the international drama, the movie definitely isn't meant for anyone but adults and the most mature older teens. The sexual content includes nudity, fairly graphic displays of prostitution, adultery, and even the emotional turmoil of a sexual offender trying to control his urges. Language is strong -- "f--k," "a--hole," "s--t" and more -- and violence includes aggressive sex and a bloody double murder.

Sexuality is a major theme of the film. The movie opens with a young woman "auditioning" to be an escort. She poses topless, and then it's implied that she must have sex with the boss to prove she's ready to be marketed. A few scenes show a woman topless or a couple having sex. One character is a call girl and is shown having sex with her client (during the act, she tells him it will cost more to continue). It's pretty graphic and shows a few different positions with the man being particularly forceful. Bare buttocks and passionate kissing and fondling are shown in another scene. One character is a sex offender, so when a woman comes on to him half naked, he pushes her away and flees -- not wanting to do anything to her. A married couple kisses and embraces. Two men discuss the services of a prostitute.

A climactic double murder takes place off camera, but audiences see the aftermath: dead men lying in their own blood. A released sex offender rejects a woman's overt sexual advances and then hides in a bathroom -- making it clear that he's capable of violence but is trying to keep her safe.

360 posits that we're all connected in some way to each other and that our relationships and choices can have far-reaching effects.

The only discernible product placement is a chauffeured Mercedes.

A lot of cigarette smoking, and, in a couple of scenes, marijuana smoke as well. Adults drink at restaurants and bars. A woman is shown hung over, and one scene follows a group of people attending an AA meeting.