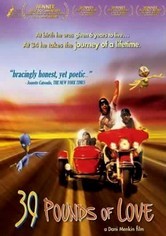 2005 NR 1h 10m DVD
This documentary tells the moving story of Ami Ankilewitz, an Israeli man who developed a rare form of muscular dystrophy at the age of 1, unable to move any part of his body except for a finger. Ami's mother was told her son would not live past his sixth birthday, but at age 34, he's proved medical science wrong. Returning to the United States, the 39-pound miracle faces the doctor who said he would not survive and makes amends with his brother.