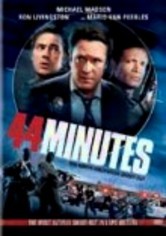 2003 R 1h 30m DVD
This drama is based on the true story of a fateful shoot-out between L.A.P.D. officers and two heavily armed (and armored) bank robbers in North Hollywood in 1997. On that day, two gunmen toting AK-47s began an assault on dozens of outgunned police. In the midst of the chaos, the thin blue line held and saved dozens of civilian lives in the process. Michael Madsen, Ron Livingston and Mario Van Peebles star.