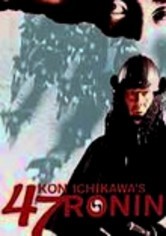 1994 NR 2h 9m DVD
When their leader commits ritual suicide for dishonoring nobleman Kira (Kô Nishimura), 47 samurai warriors band together, vowing to avenge him. After spending a year preparing themselves for battle, they launch a massive attack against Kira and his army. Ken Takakura and Hisaya Morishige star in director Kon Ichikawa's sweeping version of the classic Japanese tale, inspired by true events.