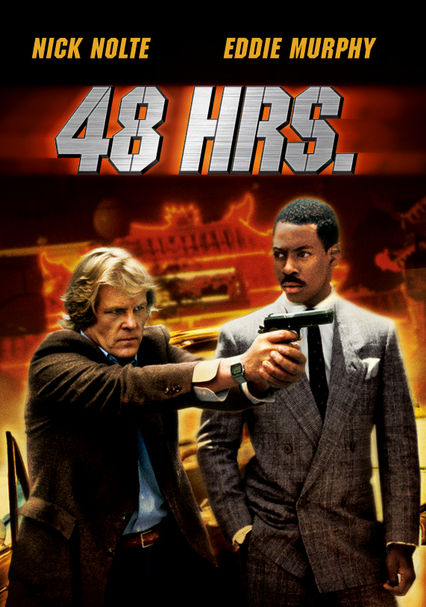 1982 R 1h 36m Blu-ray / DVD
To catch a pair of escaped cop killers, detective Jack Cates temporarily paroles wisecracking hustler Reggie Hammond into his custody. This odd couple has only 48 hours to solve the crime before Reggie has to go back to the slammer.

Parents need to know that 48 Hrs. is the hit 1982 movie starring Nick Nolte as a cop and Eddie Murphy as a convict put in an unlikely partnership to try to stop a cop-killing sociopath who has just escaped from prison. The frequent violence and gunplay, sex and nudity, and profanity ("f--k" is common) alone give this a solid R-rating; Nolte's character's often-enough usage of racial epithets such as the "N" word, "spear chucker," and "watermelon" when speaking with Murphy's character are as gratuitous as they are pointless, and that goes for usage of the words "faggot" and "dyke" as well. Given the now long-overused story formula to the graphic language and the smoking, 48 Hrs. has not aged well and is about as '80s as big hair and fat shoelaces.

One of the characters has been in prison for almost three years and is constantly talking about wanting to have sex. Breasts and female buttocks are exposed in a scene in which one of the bad guys is sitting in a hotel with a prostitute.

Prison wardens, police detectives, and police officers are shown being shot and killed by the bad guys. Frequent gun violence. The two main characters get into a lengthy fistfight. Shots are fired into a crowd waiting at a BART station. A woman hits a man in the side with a baseball bat.

Frequent profanity of all varieties. Although "f--k," "a--hole," "s--t," and "p---y" are often used, the white cop uses terms such as the "N" word, "spear chucker," and "watermelon" when speaking to the African-American convict he has temporarily partnered up with to help solve the case. The word "faggot" is used, and two women living together are called "dykes."

As an all-too-typical 1980s cop flick, there isn't much in the way of positive messages.