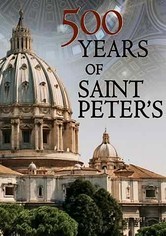 2008 NR 1h 0m DVD
Explore the majestic St. Peter's Cathedral with this exhaustive documentary. The film follows the creation of St. Peter's under the direction of chief architect Donato Bramante and examines the cathedral's history over the 500 years that followed. Construction on the famous church, situated on Rome's Vatican Hill, began in 1506. It was built over the 1200-year-old St. Peter's Basilica, the tomb of the Apostle Peter.