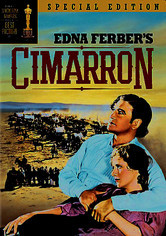 1931 NR 2h 4m DVD
Director Wesley Ruggles' sweeping adaptation of Edna Ferber's classic American novel was the first Western to win the Best Picture Oscar. Richard Dix stars as Yancey Cravat, a larger-than-life pioneer and newspaperman who moves his family to Oklahoma during the land rush of 1889. Irene Dunne co-stars as Yancey's long-suffering wife, who displays true grit after her husband deserts the family in search of further adventure.