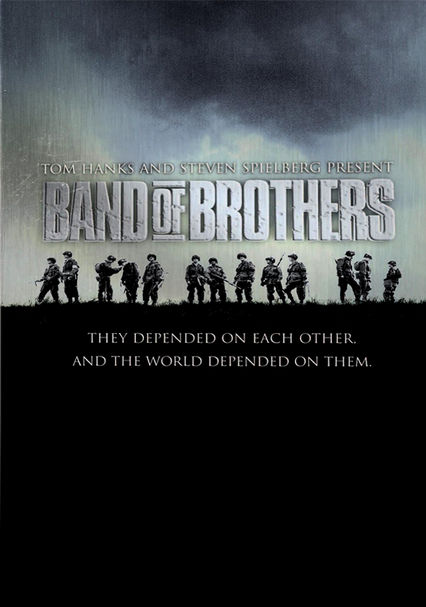 2001 NR 6 discs
Based on Stephen Ambrose's best-seller, this Emmy-nominated miniseries profiles the men of Easy Company, the airborne infantry regiment that parachuted into France on D-Day, fought the Battle of the Bulge and captured Hitler's Eagle's Nest. Drawn from journals and letters -- and punctuated with interviews with veterans -- the drama underscores the extraordinary fear and unflagging bravery that made these soldiers heroes.

Parents need to know that Band of Brothers is an intense, realistic look at a company of WWII paratroopers and is based on true stories. The miniseries was intended to be a sort of fleshed-out Saving Private Ryan, and the battlefield footage is similar, with merciless death coming suddenly and graphically to characters we've gotten to know and love over the course of the 10-hour series. There are shootings and soldiers set afire; hails of bullets with paratroopers floating through them; planes getting shot, losing their wings, and careening thunderously to the ground. Soldiers are suddenly shot in the head or in the butt, crawl on their bellies through muck and gunfire, collapse into pools of blood in disturbingly realistic scenes, while those left behind grieve and fear for their own safety. Off the battlefield, soldiers train in brutal sequences and blow off steam on weekend passes where they sometimes get up to mischief like consensual sex with European locals in which breasts and buttocks are shown. Soldiers are often shown drinking and smoking, particularly one character, who is a functioning alcoholic shown drinking from a flask almost constantly. Some families may also not appreciate scenes in which leadership is shown to be capricious and cruel, particularly as in the first episode, "Currahee." Young kids would likely be traumatized by the violence, while older ones may be a bit confused unless they know their WWII history.

The focus is on war and its ravages so there is little sex, except for the exception of Episode 9, which features one of the soldiers having consensual sex under a blanket with a German woman, whose breasts are shown while the soldier's naked rear is shown. There are also some glimpses of extremely tame 1940s cheesecake photos in which the female subjects are fully dressed.

Lots of salty talk from the men in uniform, with "f--k" and "s--t" prominent as well as hell and damn. There are colorful military songs with cursing in them, too.

Military authority is sometimes shown to be capricious and uncaring. Viewers will draw different messages about war and its purpose, since the series shows heroism, sacrifice, and the grief and psychological damage war does to soldiers.

Many characters smoke and drink on film, particularly one character, Captain Lewis, who is a functioning alcoholic and drinks quite often onscreen. The negative effects of his alcoholism are made clear in the miniseries.