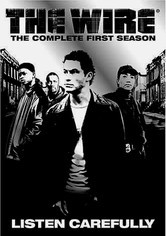 2002 TV-MA 5 discs
Creator David Simon's gritty drama takes an unflinching look at Baltimore's drug culture, through the eyes of both the dealers and the police. Season 1 follows the investigation of a violent drug-dealing crew known as the Barksdale Organization.

Parents need to know that this dark, mature series offers a very realistic representation of urban crime and the other problems that affect inner cities (but, unfortunately, offers few solutions). It constantly deals with gang violence, drug trafficking, and murder and frequently criticizes law enforcement and government agencies. It also contains extremely strong language and some nudity -- all of which makes it strictly for adults only.

Frequent scenes of people being murdered. Guns and other weapons are visibly used to cause bodily harm. There are also recurring discussions of violent acts as related to criminal investigations. Lots of gang-related fighting (including punching and kicking) resulting in bodily harm. Children engage in disruptive behavior in and outside of school.

Very strong language, including the continual use of "f--k" and other swear words. The swearing is often gratuitous.

The show's characters and their actions are complex -- ranging from criminal to selfish to noble. Overall, despite its heavy, dark content, the show provides serious social commentary on the complex problems faced by inner cities.

Drug trafficking is prominently discussed and sometimes visible, thought it's presented within context (drug dealing is a major theme of the show). Both adults and minors drink and use tobacco products.