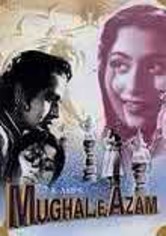 1960 NR 2h 53m DVD
When Prince Salim (Dilip Kumar) returns home after many years at war, he receives the lovely courtesan Anarkali (Madhubala) as a gift from his father, Badshah Akbar (Prithviraj Kapoor), and mother, Jodha Bai (Durga Khote). But Salim's idea to marry Anarkali right away becomes very unpopular. What follows in an epic battle between father and son. K. Asif directs this romantic drama set in the 16th century.