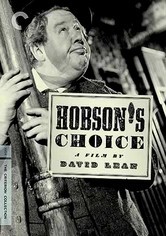 1954 NR 1h 47m DVD
In this domestic comedy directed by David Lean, boozy widower Henry Hobson (Charles Laughton) runs a successful boot shop in Victorian England. But he dominates his employees and his three daughters, until one challenges him. When his eldest, Maggie (Brenda De Banzie), and his assistant (John Mills) marry and set up a rival business, Hobson must change his autocratic ways. The film won a British Academy Award for Best Film.