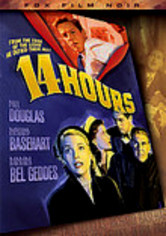 1951 NR 1h 32m DVD
Dispirited by his inability to maintain a stable relationship, Richard Cosick (Richard Basehart) stands on a ledge intent on suicide -- until sympathetic cop Charlie Dunnigan (Paul Douglas) tries to talk him down. Based on the true story of an officer who attempted to befriend a troubled man and coax him down from the dangerous heights of a Manhattan hotel, the film also features Grace Kelly in her big-screen debut.