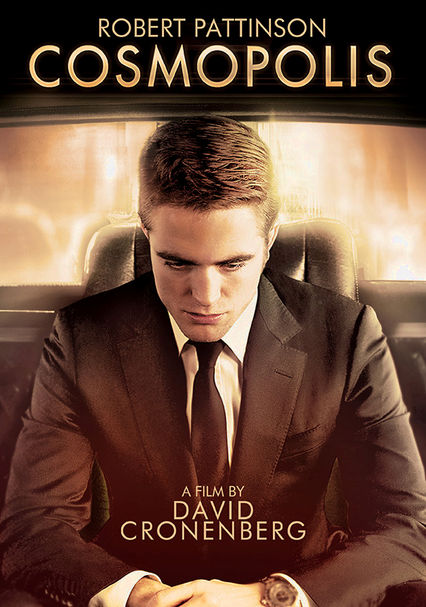 2012 R 1h 49m Blu-ray / DVD
Wall Street whiz Eric Packer is caught in Manhattan's gridlock as he helplessly watches his empire fall with the rise of the Chinese yuan. Activity erupts in the streets, and paranoia sets in as Packer links the clues to his imminent assassination.

Parents need to know that Cosmopolis, based on a novel by Don DeLillo, is the latest from offbeat director David Cronenberg. It's intense and complex and definitely intended for adults rather than star Robert Pattinson's Twilight-loving tween/younger teen fans, though mature teens may be interested in the film's timely themes. Sex is the biggest issue: The main character is married and sleeps with two other women over the course of one day. The sex scenes are graphic, and one features full-frontal female nudity. (Sex talk and sexual tension are pervasive throughout the film as well.) There are three sudden, shocking violent incidents involving guns, knives, and blood. Language is very infrequent but includes single uses of strong words like "f--k." And Pattinson's character drinks what appears to be vodka and brandy in two scenes, but not to drunkenness.

The main character is married and has graphic sex with two other women during the course of a day. One sex act has no nudity, but the other features full-frontal female nudity (and very nearly full-frontal male nudity, but not quite). Also strong sexual tension and talk about sex throughout.

For the most part, violence is kept to a minimum, but there are three sudden, violent, intense moments involving stabbing and/or gunshots and blood. Also, after getting hit by a pie, the main character kicks a man in the crotch.

Language is very infrequent but includes one or two uses of strong words like "f--k," "t-ts," and the "N" word.

Cosmopolis is a dense movie with many different but timely ideas about the differences between the wealthy and the lower classes. The wealthy main character has enough money to try to buy perfection, but he finds he can't have it and still longs for something -- even if it's pain. His journey isn't very clear, but it appears that he's beginning to ponder the "beauty of the lopsided." Either way, the movie is likely to inspire discussion.

Some scenes appear to take place in or around Times Square. Some billboard advertising can be glimpsed in the corners out of the limo windows, but it's not overt.

The main character drinks what appears to be vodka and, later, brandy, in his limo. Cigarettes are mentioned but never produced.