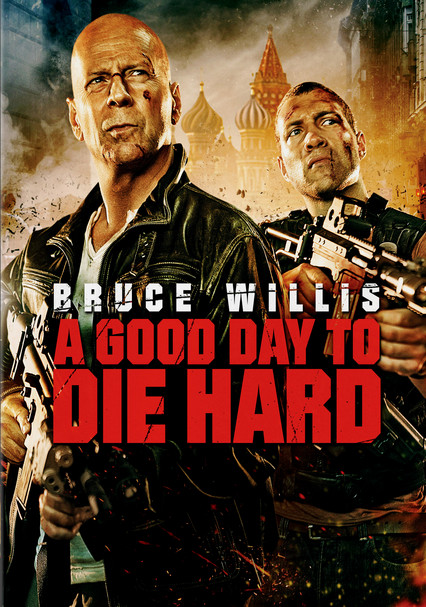 2013 R 1h 37m Blu-ray / DVD
New York cop John McClane goes to war with powerful criminal forces one more time when his son gets caught up in a rebel Russian's prison escape. Operating on foreign soil, McClane tries to free his son but soon has a much bigger fight on his hands.

Parents need to know that A Good Day to Die Hard is the fifth -- and least entertaining -- of the action-heavy Die Hard series. The attempt to tone down the previous entry, Live Free or Die Hard, for a PG-13 rating for has been abandoned this time out. Big, explosive action violence is evident throughout, with characters shot and killed (some with sprays of blood), huge crashes and explosions, and falls from heights, all without consequences. Language is also strong, with more than one use of "f--k," many uses of "s--t," and more. One female character's sex appeal is played up (she's shown in alluring outfits), bad guys are shown smoking briefly, and some brand names are shown and/or mentioned. But ultimately the biggest issue is the vigilante justice dispatched by the heroes; bad guys are killed without remorse or consequence.

One female character's sex appeal is played up. She wears a leather motorcycle outfit in one scene and alluringly unzips the jacket. (No nudity shown.) A man caresses and nuzzles her while both are clothed. One scene takes place in a nightclub, with some dancing girls in skimpy outfits shown in the background.

Constant, over-the-top action violence and destructive mayhem, including car crashes and helicopter crashes, falls from heights, hails of bullets, huge explosions, and dozens of dead bad guys. Some characters are shot graphically in close-up, sometimes in the head or other vital organs, with sprays of blood. Strangling, punching, helicopter battles. The "good guys" kill any and all bad guys without consequences. They're covered with bloody cuts and scratches throughout. One character removes a metal bar from another character's abdomen after he's been stabbed by it.

The "good" guys think nothing of simply shooting and killing all bad guys, with no consequences. At one point, the main character even brags that having a son in the CIA will get him off the hook, no questions asked. Also, the father character practices "tough love" with his son, ridiculing him for having weaknesses and feelings. That said, they eventually do get closer, and McClane is persistent, if nothing else.

Some bad guys are seen briefly smoking cigarettes. One scene takes place in a nightclub, with some background drinking suggested.