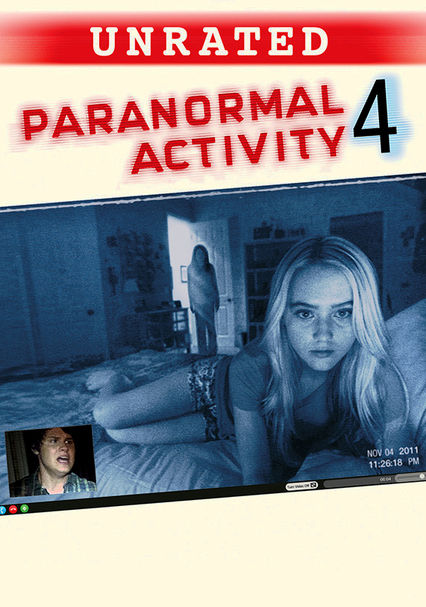 2012 UR 1h 35m Blu-ray / DVD
The chilling saga of the young and psychotic Katie turns a new page, and the homicidal spirit she embodies claims a new gallery of victims. As the atmosphere goes from strange to stranger, a mysterious husband, wife and child move in down the block.

Parents need to know that Paranormal Activity 4 is the fourth in the spooky Paranormal Activity series. Violence is about the same as in the others: More is suggested than shown, though there are some sudden bursts of "demon" activity (i.e. characters tossed about and injured by unseen forces). A teen's neck is snapped, and there are some monster faces and a little blood (mostly in flashback). Language is a bit stronger in this one, with several uses of both "f--k" and "s--t." A teen boy and girl flirt mildly but mostly seem to be friends. An Xbox with Kinect becomes a major storytelling device. Teens who survived the first three movies might want to make it a point to catch this one, but it's becoming very clear that the series is running out of steam.

A teen boy flirts with a teen girl, placing his hand on her knee. Over a Skype chat, he asks to see her "boobie" (she refuses).

An evil, unseen demon pushes a boy underwater in the bathtub. A teen boy's neck is snapped. A grown woman and man are hurled around rooms, smashing up against walls and on floors. A teen girl is locked in a garage with a car engine running. Some scary faces/monsters are shown very briefly, and some blood is shown (mainly in flashbacks to the second movie). An ongoing sense of dread/fear permeates the movie.

Bad things simply happen to good people in this movie, with no sense of justice or fairness.

An Xbox with Kinect is shown and mentioned several times and is part of the movie's design. A character demonstrates how it radiates pinpoints of light (sensors) throughout a room, which can be seen in certain conditions. Other products displayed in the background include Pepsi, V8, Popchips, and Jif peanut butter. A Prius is mentioned. The Google web browser is shown.

The father is shown drinking beer and wine while watching TV in one scene. The mother gives the teen daughter a sleeping pill, and the father argues with her about it.