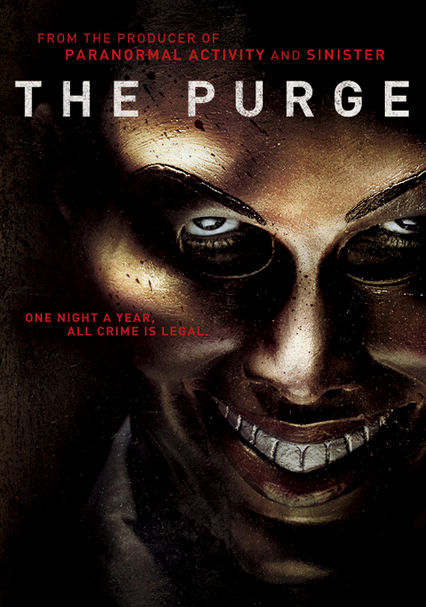 2013 R 1h 25m Blu-ray / DVD
In a crime-ridden future when overtaxed cops let murder and other crimes rule the streets one night a year, someone's knocking at James Sandin's door. Tormented by an unknown thrill-killer, Sandin makes a desperate stand to save his wife and family.

Parents need to know that The Purge is a futuristic sci-fi/horror movie with a horrific idea: Once a year, American citizens are given a 12-hour period in which they can do whatever they want -- including murder -- legally. This supposedly has the effect of reducing crime and lowering unemployment. Violence is strong throughougt the movie, with various beatings, stabbings, and shootings, with lots of dead bodies (including teens) and a fair amount of blood. Language includes a few uses of "f--k" and other strong words, and a teen couple is shown making out and getting a bit hot and heavy. The movie may inspire discussion about human nature, mob mentality, the function of society, consumerism, exploitation, the rich and the poor, and other hot topics.

Two teens are shown kissing and engaging in "heavy petting." The girl undoes a couple of buttons on her top, but they stop before anything goes further. Otherwise, the movie shows a married couple who are comfortable with each other, but with no real sex or innuendo.

The movie starts off with surveillance footage of acts of violence, fighting, stabbings, shootings, and dead bodies. During the course of the movie, characters (both major and minor) -- including teens -- are shot, stabbed, and/or killed. There's heavy fighting, including attacks with various objects (pool cues, vases, etc.). A prisoner is tied up and tortured (a character pokes a letter opener into his open wound). A woman's face is smashed on a glass table, and her nose and mouth bleed profusely. A fair amount of blood is shown, though the movie isn't overly gory.

Language is fairly infrequent but contains strong words. "F--k" and "motherf----r" are used a few times. Other words include "bulls--t," "son of a bitch," "penis," "Jesus Christ" (as an exclamation), "hell," and "goddamn." A middle finger gesture is used.

The messages in this movie occupy complex gray areas. The youngest boy in the family tries to do a good deed, but it goes horribly awry. The family must also decide between fighting (possibly killing others or getting killed) or facing certain death. Then there's the overall message of the "purge" itself. The movie includes many voices on television and radio arguing over the event's good points and bad points -- although either way it comes down to violence and killing without consequences.