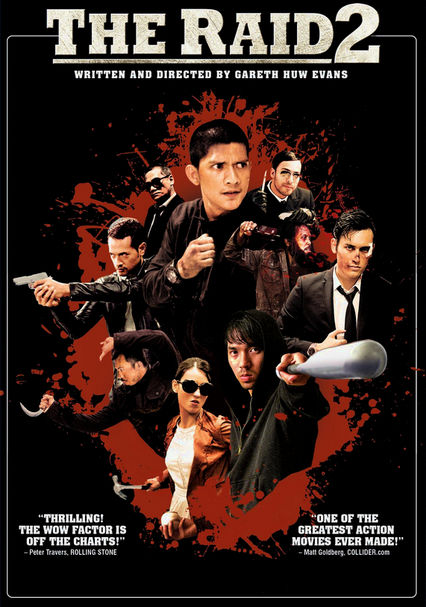 2014 R 2h 28m Blu-ray / DVD
This action-packed sequel finds Rama working undercover as a prisoner to befriend Uco, the son of a powerful new crime lord, Bangun. But as Rama tries to shatter Bangun's stranglehold on Jakarta's police force, his own demons threaten the case.

Parents need to know that The Raid 2 is the sequel to the ultra-violent Indonesian action film The Raid: Redemption, following the same lead character, who's now an undercover cop instead of a rookie. Violence is very strong, with many highly skilled martial arts scenes, but also lots of shooting, stabbing, slicing, blood, gore, and death. There's also an extended car chase with crashes. One scene takes place in a warehouse where porn videos are made, with a topless woman and some intense sex talk. Language includes frequent uses of "f--k," "s--t," and other words in the subtitles. Many of the gangster characters drink and smoke socially in clubs and in meetings, though no one is shown to be drunk. Since the movie is subtitled and runs 150 minutes, it's for hardcore action fans only.

The movie is filled with incredibly strong martial arts violence and fighting. Guns are occasionally used, blades are used to stab people, bones are broken, and plenty of blood is spilled. Several major secondary characters die. A woman uses two hammers to beat up several people in a train car, with gory results. A man's face is burned on a grill. There's a car chase with crashing and people thrown from cars.

The main character gets into fight after fight and battle after battle, beats up many men, kills a few, and destroys lots of property, with no real consequences. He does this, apparently, to protect his wife and child, but that's about it. He doesn't learn anything.

Several scenes take place in clubs or in meetings, where the various gangsters are shown socially smoking or with cocktails. No one gets drunk.