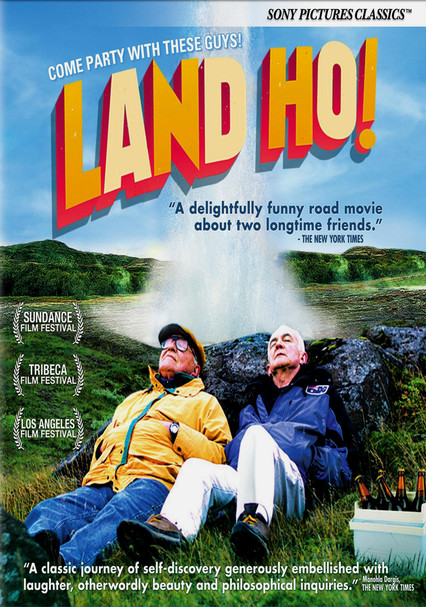 2014 R 1h 36m Blu-ray / DVD
In a bid to gain life perspective, retired Mitch persuades his ex-brother-in-law to join him on a journey through the frigid landscapes of Iceland. This freewheeling road comedy follows the pair through a series of encounters that changes them both.

Parents need to know that Land Ho! features some frank conversations between two 60-something men facing the twilight of their years. They discuss everything from retirement to sex to a bitter divorce and the death of a spouse. It's fairly weighty stuff that might not resonate with -- or, frankly, be of interest to -- younger teens. There's a fair amount of swearing, including "f--k," "s--t," and more. One character is sexist and doesn't hesitate to comment on women's clothing, body parts, etc. There's also a fair bit of drinking (once to the point of passing out) and some drug use (marijuana).

A man objectifies women, talking about their body parts, including genitalia. Two people who just met end up kissing, and it's hinted that they spend the night together, though viewers don't see anything.

Growing old doesn't have to mean growing stale. Also, friendships that run for decades can ground you when you need a ballast. Plus, changing your scenery can be a tonic.

Some labels are seen or mentioned, including Hummer, Facebook, and Lonely Planet.

Some drinking in bars and restaurants; one character drinks so much that she passes out. One character smokes pot, with increasing frequency as the film unfolds.