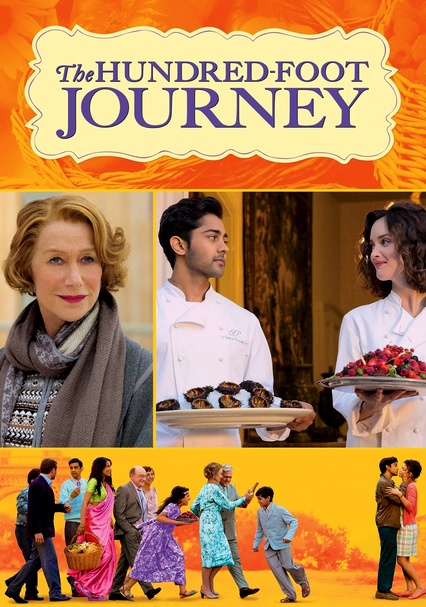 2014 PG 2h 2m Blu-ray / DVD
Relocating from India to a quiet village in the south of France, chef Hassan Kadam and his family open a restaurant called Maison Mumbai. But when their business starts to thrive, a competing restaurateur launches a war between the eateries.

DramaDramas Based on the Book

Parents need to know that Lasse Hallstrom's The Hundred-Food Journey follows the journey of Hassan (Manish Dayal), a young and extremely talented chef, and his/his family's culture clash with rival restaurateur Madame Mallory (Helen Mirren). The many mouth-watering food scenes are often accompanied by wine, and there are some scenes in which one character starts to drink a bit more heavily (to suggest depression). Two brief moments feature some violence (including one in which men throw fire bombs) -- one of which causes a sad death. There are also a few romantic kisses and suggestions of intimacy and language along the lines of "bloody."

Two characters share a few kisses, and in one scene, they emerge from a back room hastily putting their clothes back on, suggesting they've shared an intimate moment.

An angry mob storms a restaurant and burns it to the ground, leading to a sad death. Later, two men deface and try to burn down another building in the dead of night; a main character is injured as a result of the fire.

Some characters use the British exclamation "bloody"; also a mumbled use of "s--t," plus "hell" and "oh God."

Home is wherever your family is. The film also stresses the importance of accepting differences in other people, including cultures and cuisines. Love of family and cooking are prominent themes.

Repeated mentions of the Michelin guide to French dining and its famous star system for rating restaurants.

Adults often drink wine with meals. One character is later shown drinking frequently to suggest that he's slipping into depression.