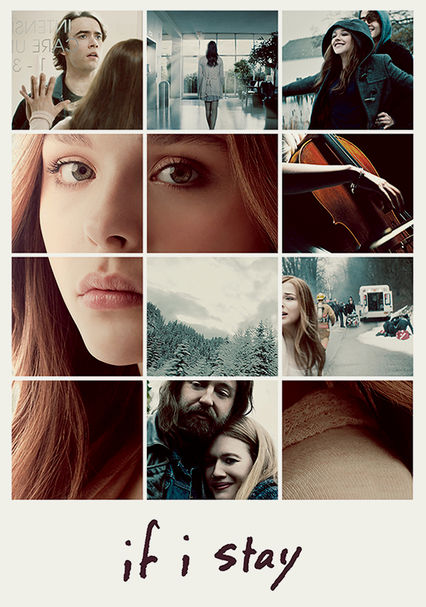 2014 PG-13 1h 46m Blu-ray / DVD
While trying to choose between love and a musical career, 17-year-old Mia Hall finds her life upended by a tragic car crash that puts her in a coma. As she lies unconscious, Mia has a vision of her life that leads her to another crossroads.

Parents need to know that If I Stay is a romantic teen tearjerker based on Gayle Forman's best-selling 2009 novel. It will appeal to the same audience as The Fault in Our Stars -- i.e., teens and adults familiar with the book or interested in coming-of-age romances. Because the story follows a young cellist (Chloe Moretz) who's comatose and must choose between life and death, there are understandably some upsetting and devastating sequences, including a fatal car crash that's revisited throughout the movie. Mia and her boyfriend Adam's (Jamie Blackley) love story is mature, passionate, and includes two non-gratuitous sex scenes (bare shoulders shown). The dialogue is occasionally punctuated with strong language like "s--t" and "bitch," and there are a couple of scenes of underage drinking in a music venue. If your teens have read the book or are ready for character deaths and near-death experiences, this is a poignant and romantic film that depicts one of YA's most beloved literary couples.

Adam and Mia have sex, and there are two love scenes -- both of which show the couple bare shouldered and either in bed or on the floor. Neither scene is gratuitous. It's mentioned that Mia was a virgin, while Adam was not. Also passionate kisses between the teens and between Mia's parents, who are very affectionate with each other.

The car accident that kills members of Mia's family and leaves Mia in a coma is revisited several times throughout the film. These scenes are disturbing and upsetting. Mia's discovery of each death is heartbreaking, and her boyfriend, grandparents, and friends are also shown sobbing, embracing, and grieving the loss of their loved ones.

Heartfelt messages about love and relationships -- how meeting someone when you're young can make a long-term relationship more difficult, but it's still worth the risk if it's the real thing. Mia's open relationship with her parents shows how important it is for parents and kids to trust and understand one another. Adam shows Mia that people should love you for who you are, not for who they think you can change into.

Underage drinking at a music venue in a couple of scenes.