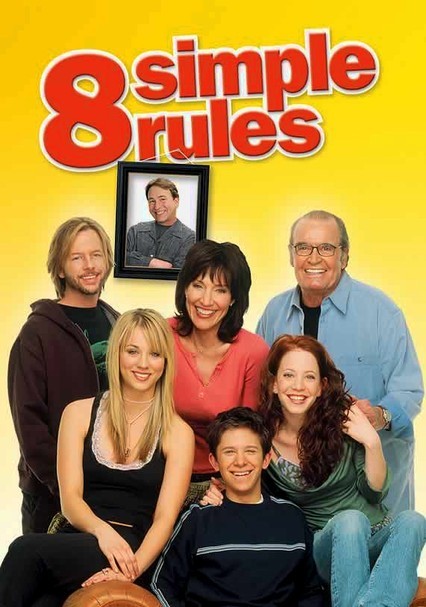 John Ritter ("Three's Company") and Katey Sagal ("Married ... with Children") star as harried husband-and-wife team Paul and Cate Hennessy in this ABC family sitcom about the rules of raising adolescents. In the show's first season, Cate decides to go back to work as a nurse, prompting Paul to take a more active role in raising their teenage daughters, Bridget and Kerry (Kaley Cuoco and Amy Davidson), and son, Rory (Martin Spanjers).

Mirroring the surprising death of its beloved star John Ritter, the poignant second season of this ABC sitcom finds the Hennessey family struggling to deal with the unexpected loss of stay-at-home dad Paul. Cate (Katey Sagal) must raise three children (Kaley Cuoco, Amy Davidson and Martin Spanjers) on her own, with some help -- and some hindrance -- from her not-so-handy father, Jim (James Garner), and their new houseguest, C.J. (David Spade).

Parents need to know that despite a bit of iffy language ("damn," "ass") and some fairly light sexual innuendo, this sitcom offers a positive representation of family, teens, and parental guidance. The first season focuses on a father who becomes more involved with his teenagers' lives after his wife goes back to work; in later episodes, coping with the sudden death of a parent and living/coping with extended family become central themes of the show.

Occasional hugging and kissing. Some sexual innuendo that will go over the head of younger viewers. Discussions about dating (both teen and adult). C.J. makes references to "booty calls." Occasional references to homosexuality.

No violence, but some sadness when a major character dies.

Presents positive images of family, teens, and parental guidance. Bridget, Kerry, and Rory aren't perfect kids, but they're basically good ones who respect their parents. Bridget is presented as a ditzy blond; Kerry is a social activist. Coping with the death of a parent becomes a central theme in the second season; extended family becomes central to the healing process. C.J. often provides questionable advice to the kids, but he's never harmful and clearly loves them. Not much cast diversity to speak of.