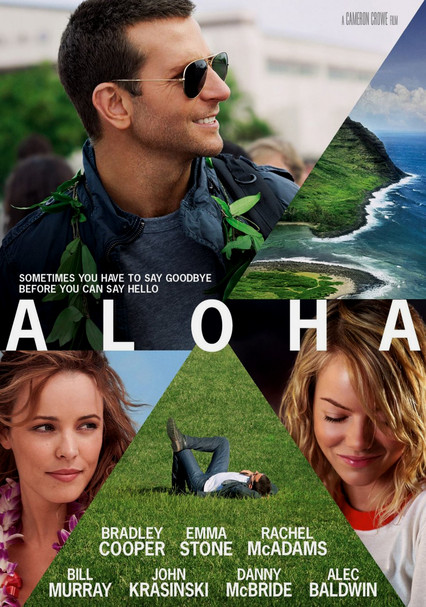 2015 PG-13 1h 45m Blu-ray / DVD
Returning to Hawaii to coordinate the launch of a revolutionary weapons satellite, defense contractor Brian Gilcrest reconnects with an old flame. Before long, however, he's distracted by the alluring Air Force officer assigned to be his escort.

Parents need to know that Aloha, a military-themed romantic comedy written and directed by Cameron Crowe, follows the adventures of a military contractor (Bradley Cooper) who returns to Hawaii for a job and faces an ex-girlfriend (Rachel McAdams), a former boss whom he feels betrayed him, and an Air Force pilot whom he can't resist (Emma Stone). In short, it's a complicated affair about love, work, and redemption that's thematically a better fit for teens and adults than for younger viewers. Expect some swearing ("hell," "s--t," and a use of "f--k"), social drinking by adults (sometimes to the point of getting drunk), some innuendoes/comments about hooking up, kissing, and references to hardship in Afghanistan.

A kiss, plus references and innuendoes about hooking up.

References to being in Afghanistan and getting injured there (though nothing is shown). A certain menacing vibe pervades some scenes.

Forgiving others and yourself goes a long way toward healing and redemption. Also, open yourself up to new experiences.

Some visibility of brands including Sony Vaio, Dakine, Ray Ban, and Facebook.

Social drinking by adults, sometimes to the point of getting drunk.