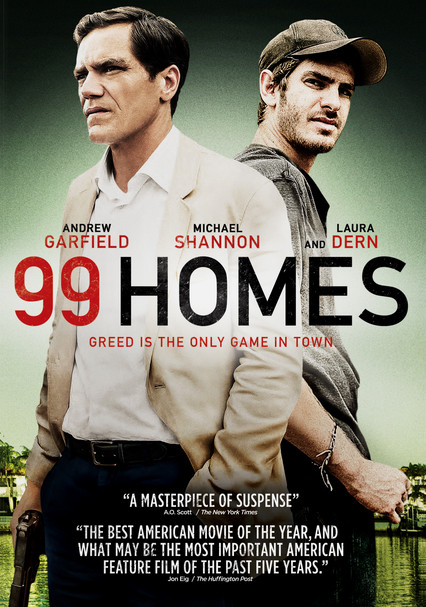 2015 R 1h 52m Blu-ray / DVD
After being evicted from his home by a flinty real-estate dealer, jobless Dennis Nash unexpectedly ends up working for the man. But to Nash's dismay, his new boss soon begins ordering him to turn other families out of their houses.

Parents need to know that 99 Homes is a powerful, thought-provoking indie drama that weaves the recent financial crisis with the classic Faust legend. Expect a couple of scenes of bloody violence and gore, a dead body, and some fighting, as well as a house filled with excrement. Language is fairly strong, with uses of "f--k," "s--t," "c--ksucker," and "a--hole." There's some sexual innuendo and passionate kissing, as well as scantily clad women and objectification of female characters. Characters smoke cigarettes regularly (one character also smokes a "vape"), and there's a scene of heavy drinking and cigar smoking at a party. Given that the film stars The Amazing Spider-Man's Andrew Garfield, teens may be interested.

A moment of startling blood and gore -- and a bloody corpse. Violent fighting. A house full of human excrement.

The storyline is a spin on the Faust legend, in which a man sells his soul to the devil in exchange for riches; he loses focus on what matters but eventually realizes that family is the most important thing. The lessons of the economic crisis that began in 2008 (and in some ways, still continues) -- i.e. banks gambling on bad mortgages and earning huge profits by foreclosing -- are part of the plot; the movie manages to address these important issues without getting preachy or overbearing

Characters smoke cigarettes on a regular basis. A character smokes a "vape" cigarette. Party with lots of drinking and some cigar smoking.