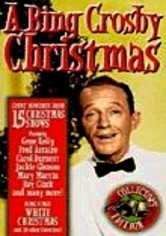 2000 G 1h 0m DVD
Celebrate the season with a selection of the best moments from Bing Crosby's annual Christmas specials. Narrated by Gene Kelly and hosted by Bing's widow, Kathryn, the segments are drawn from the broadcasts of 1962 through 1977. The Crosby kids grow up before viewers' eyes, Fred Astaire, Frank Sinatra, Jackie Gleason, Carol Burnett and Bernadette Peters make guest appearances, and Bing closes the show with his trademark song, "White Christmas."