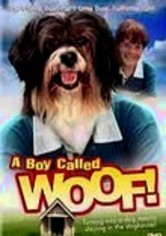 2005 NR 1h 35m DVD
Ten-year-old Eric Banks (Edward Fidoe) has a unique problem: Whenever his nose begins to itch, he changes into a cute shaggy dog -- and he can't seem to stop it. Fortunately, Eric has an ally in his best friend, Roy (Thomas Aldwinckle), who's vowed to help his poochy pal. It's nonstop adventure as Eric and Roy find themselves in hilarious and unpredictable situations as they try to sniff out the cure that will keep Eric out of the doghouse.