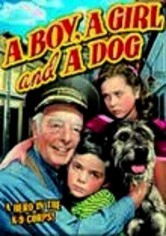 1946 NR 1h 40m DVD
When young Kip and his friend Button adopt Lucky, a stray dog, on the sly, they're soon found out. To prevent the pooch from being sent to the pound, they enlist the help of a soldier, who enrolls Lucky in the Army's special K-9 Corps. The scruffy but lovable dog goes on to distinguish himself in action during World War II. This nostalgic wartime drama stars Lionel Stander, Jerry Hunter, Sharyn Moffett and Harry Davenport as beloved old Gramps.