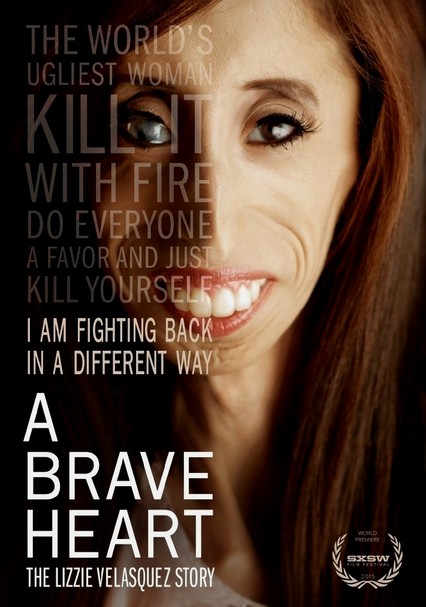 2015 PG-13 1h 18m DVD
Filmmaker Sara Bordo traces the inspiring journey of Lizzie Velasquez, who was born with a medical condition that left her with distorted facial features. Suffering verbal abuse during her youth, she rose above it to become an anti-bullying advocate.

Parents need to know that A Brave Heart is an inspiring, if sometimes intense, documentary about Lizzie Velasquez, who's fought tirelessly against bullying (both online and offline) ever since discovering a video of herself on YouTube titled "The World's Ugliest Woman." Born with a very rare congenital disease, Velasquez faces many health problems but still travels the country and the world speaking out against cruelty and in favor of anti-bullying legislation. She's an outstanding role model, and the film has many powerful messages for tweens and teens. That said, some parts can be upsetting, such as when the movie talks about bullying victims who've killed themselves (one mother is interviewed and gets very teary), when Lizzie reads hurtful comments about herself (and her friends and family members react with anger and sadness to her situation), and when Lizzie's precarious health is discussed. This is an important movie for parents and kids to watch together; hopefully it will encourage everyone who sees it to embrace who they are and stand up for themselves and others.

Song "Baby Got Back" is referenced.

References to extremely cruel online comments and other forms of bullying, including people on YouTube saying that Lizzie's parents should have aborted her (and much more). Discussion of bullying-related suicides, particularly Megan Meier, who hanged herself after becoming the victim of online bullies (Megan's mom is interviewed and begins crying at one point).

"F--king" is shown once in a screen capture of a cruel text about Lizzie.

Many important, powerful messages: No matter what, don't let bullies or haters get you down. Stand up, speak up, and make a difference. Be true to yourself, fight for what you believe in, and never stop trying or working for your dreams. What you do and strive for is what defines you, not how you look. Anything is possible if you believe in yourself and have a strong support system. Empathize with the people who bully you, and forgive those who wrong you.