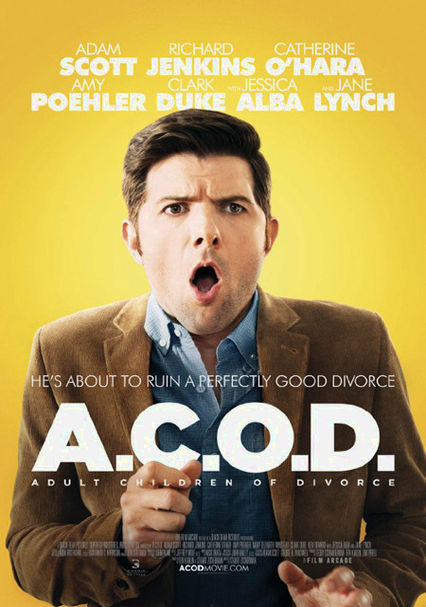 2013 R 1h 27m Blu-ray / DVD
After enduring decades of conflict between his divorced parents, Carter tries to end the hostilities on the eve of his brother's marriage. Instead, he ends up making surprising discoveries about his past that only increase the tumult.

Parents need to know that A.C.O.D. is a comedy about children who grew up with divorced parents. It definitely has bite and does deal with mature themes, specifically how kids fare when they're in a combative household that ends up in an acrimonious split. Parents bicker (and worse) in front of kids, and adults behave like children, with their kids having to clean up their messes. There's some sex talk, fooling around, and partial nudity -- a man's backside is glimpsed in the middle of what appears to be a sexual act -- as well as swearing (including "c--t" and "f--k"). Adults participate in social drinking; one smokes, and another is asked whether they want to get high.

A man is caught having sex in the kitchen; his backside is visible. (Viewers don't see much of the woman.) Some talk of sex, but nothing extremely graphic. Another couple starts to have sex in a different kitchen, but someone walks in on them before much clothing is shed.

A mean verbal fight takes place in front of kids at a birthday party; more yelling and screaming takes place later; a house is accidentally set on fire.

Sometimes you have to fall apart to put yourself back together again. Also, you can't bury the past; it will rise up every time. You have to learn to accept it and not let it define you.

An adult character is asked whether they want to get high. Social drinking. A woman is shown smoking.